This ‘From the Publisher’ article by Michael Lloyd was first published in SCN Vol. 39 no. 3, July 2021

Pacific Fair is for sale – the whole thing – as distinct from just a part of it. I tried to remember when that last happened in our industry; a super prime regional centre, 100% on the market. I can recall many sales of a half, a quarter, or some other fraction, but rarely the whole. So, what’s the capitalisation rate?

The sale of a major regional (in part – 50%, 25% or whatever), isn’t really a sale; it’s a business deal between two parties. The ‘seller’ wants any or a number of things; greater liquidity, a broader divestment, a wider spread. The cash-rich buyer wants much of the same and this asset fits the bill. In most cases, they’ve got similar viewpoints on the value, derived from their reading of risk, inflation, future economic growth, historical and future trends of bond rates and a myriad of other influences that determine, ultimately, their opinion of an acceptable cap rate. And this is why it’s not really a ‘sale’. Their view on the cap rate is more or less identical; whether it’s 5.2%, 5.15%, 5.26% or even 5.3%; the difference is small and just makes one of them feel superior in the negotiating room. In Australia, the parties know each other well – it’s all smiles – the deal suits both players. If it didn’t, they wouldn’t be there; it’s not a sale, it’s a ‘process’.

Pacific Fair is for sale. So, what’s the cap rate?

Now, for the first time in a long time, a super-prime regional is offered on the open market – 100% of it. What’s the price? What’s it worth? More importantly, what will someone pay for it? It needs only one purchaser; someone who will pay more for it than anyone else – the highest bidder – one who all other prospective purchasers will opine, paid too much! So, what’s Pacific Fair worth? To answer that question, one first needs to define it. What is Pacific Fair?

For a start, it’s a shopping centre, but it’s so much more. Pacific Fair dominates Gold Coast shopping; it’s the Chadstone of Queensland.

The Gold Coast is unusual. It’s fragmented, there’s no real geographical heart. Cavill Avenue in Surfers Paradise tried to lay claim but didn’t succeed. The ‘Luxury Shop’ street, although housing Louis Vuitton, failed to consolidate. Surfers never really emerged as the Gold Coast’s retail centre and dissipated into a motley bunch of souvenir shops, fast food and convenience outlets, with some speciality retail scattered about, without any organised, or even accidentally acquired, theming.

Pacific Fair, already powerful at opening day, over the years entrenched itself as the city centre; the community focal point of the Gold Coast. It absorbed the international luxury component ostentatiously displayed in a purposely designed precinct – Louis Vuitton, Gucci, Prada, Hermès, Bulgari and Salvatore Ferragamo to name but a few, along with the cream of Australian designers. The new international ‘mass fashion’ houses sought representation, the likes of Uniqlo, Zara, Boss, H&M, Sephora et al took flagship stores. They all complemented the majors – David Jones, Myer, Woolworths, Coles, Target, Big W, Kmart and, quite frankly, anyone who was anyone on the Australian retail scene.

Pacific Fair emerged as the unequivocal dominant force. At more than 150,000m2 (GLA) and as the fifth largest centre in Australia, by 2019, it had established itself as the unchallenged retail heart of the entire region between Brisbane and Tweed Heads.

But there’s more. It was only about a decade or so ago that Brisbane earnestly started transforming itself into a truly international city. Prior to 2000, the Queensland capitol was little more than a large country town. But as the new millennium dawned, Brisbane’s growth accelerated. Its infrastructure began expanding exponentially; freeways leading to and surrounding it made travel to both the north and south tourist regions, effortless. Noosa to the north was virtually linked to Gold Coast and beyond. Brisbane attracted new businesses – sophisticated cafés, bars and restaurants, to cater to the booming population growth coming from the southern cities. New apartment buildings, new suburbs and the gentrification of old ones were the order of the day (and the decade) with the whole region, from Noosa to Tweed Heads, undergoing a rapid transformation in record time.

It’s blatantly obvious that within the next 20 to 30 years or so, the entire region between Noosa and Coolangatta on the south-east tip of Queensland, will become one large, expansive, homogenous high-density region. The 60 kilometre stretch of the Gold Coast, housing more than half a million people, will expand proportionately. Already hosting millions of tourists each year, the Gold Coast will increasingly position itself as Australia’s primary holiday destination and represent the broad ‘face of tourism’ for international visitors to the country. At its heart sits Pacific Fair.

Whoever buys Pacific Fair, will, quite simply, be purchasing a significant piece of Australia.

Add to all of the above the fact that Australia leads the world in its management of shopping centres. This country is home to the most professional, established, authoritative, expert and experienced shopping centre managers – and there are many of them – working for ownership/management companies, developers, specialist management organisations, agencies and the like. And not one of these management institutions would pass up the chance to manage Pacific Fair for a reasonable fee. And once entrenched, the managers will not just collect rent and operate the centre. They will liaise with government, with urban planners, with the authorities; they will understand the issues, the position Pacific Fair adopts in the community as an integral part of the regions infrastructure.

So, here’s the bottom line. Any pension fund, whether private, public or governmental; any super-fund, private wealth fund, sovereign/state wealth fund or any institution whatsoever, can buy a significant piece of Australia, have it managed by the best in the world, put it to bed and reap the rewards for the next 50 years or even longer. The most difficult investment to find, in any sector whatsoever, is one that will consistently, year by year, beat inflation by just one point; even to merely keep up with it, is an almost impossible task. So, what’s the cap rate?

In all likelihood, a figure in the vicinity of 4.75% will be discussed. It’s the ‘going rate’ for prime properties. But this is a ‘sale’, as distinct from a ‘deal’ between friends. This is a sale to anyone in the world that wants a piece of Australia. This is an opportunity and whoever wants to seize it, will need to pay a premium. Many bidders will be limited by constitution, by regulation, by agreed parameters, even by law. But a few may have no such constraints or will at least have the ability to gain exemption for such a rare offering. After all, it’s a prime piece of Australia. Rumours are that the sale price is in the vicinity of $1.8 billion and that probably represents a cap rate close to 4.75%.

A 3.5% cap rate, therefore, would raise another billion or so. It’s worth it. To secure such an asset by paying a premium some may describe as folly, in 10-years from now, may be defined as supreme commercial astuteness.

At that time, in 2032 when the whole world will be watching the Brisbane Olympics with the Gold Coast being featured across the globe, Pacific Fair may well get the most lucrative marketing boost ever seen for a shopping centre – and it won’t cost them a nickel! 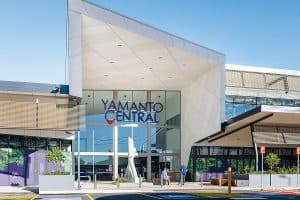 Rethinking Retail: Why Retailers with ‘bricks’ as well as ‘clicks’ outperform the competition
From the Publisher – March 2021
Comment