Stockland has released an inspirational Father’s Day Campaign, launching across its national social and owned media channels to an audience of over 415,000 people.

The heart-warming, content-led campaign, titled ‘Dad. A small word for a big job’, celebrates modern fatherhood and acknowledges the many important roles dads play before encouraging shoppers to thank the father figure in their life this Father’s Day.

Ben Allen, General Manager Marketing at Stockland, said: “We are proud to present a Father’s Day campaign that celebrates all dads and father figures across Australia and acknowledges the many different and important roles that father’s play in our families and communities.”

“While Father’s Day is widely celebrated in Australia, it can be less emotive than Mother’s Day. Mums tend to get rightfully flooded with appreciation and very personal gifts on their special day. But dads don’t always get the attention they deserve and generally receive more practical style presents like socks and tools.” “With Google Trends data indicating that search volume for Father’s Day is one third of that of Mother’s Day, we saw an opportunity to encourage Australians to give their dads the Father’s Day they deserve. With this in mind we collaborated with CX Lavender to create an engrossing and emotional campaign that celebrates the various roles dads play and compels shoppers to think about how they can thank the father figure in their life.”

“Whether the sideline supporter or the strong silent type – this Fathers’ Day we’re celebrating all kinds of dads.”

As a local extension of the campaign, Stockland also worked with Ella Smith Communications to create ‘The Dad Files’, an editorial and portrait series that celebrates the faces of dads around Australia.

The series features a collection of stories from father’s across the country, who have been photographed and asked what fatherhood means to them. These diverse, insightful and tender stories have now been shared across all 39 Stockland shopping centre websites and social media channels as well as featured in pop-up galleries at several Stockland centres.

Ben continues, “With over 412,000 customer visits to a Stockland shopping centre every day, we see Father’s Day as an opportunity to showcase and celebrate the significant roles dads can play in our lives. We hope this year’s campaign will inspire our customers to acknowledge, thank and celebrate the inspirational men who’ve helped raise them.”

For customers who might be stuck for ideas this Father’s Day Stockland has also created a series of blog posts to help shoppers find a bespoke, local gift for the father figure in their life.

The ‘Dad. A small word for a big job’ video can be viewed here and on Stockland’s YouTube channel here 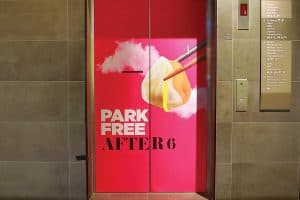