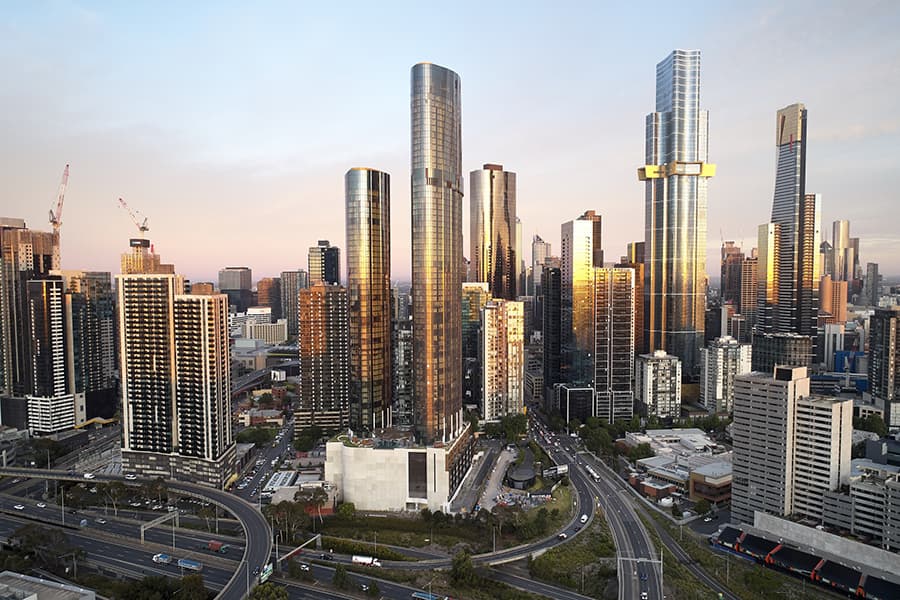 It’s a milestone moment for Melbourne’s largest lifestyle precinct and luxury residential offering designed by COX architecture – the completion of Stage One construction at Melbourne Square, Southbank. Fitted with a brand new full-line Woolworths supermarket – a first for Southbank – and six food and beverage retail operators, the lifestyle precinct is complete and ready for Melburnians to enjoy.

Melbourne Square Shopping Centre was recently acquired by Primewest in an off-market transaction negotiated by JLL. The company paid $70 million for Woolworths Melbourne Square, which sits at the heart of the proposed $2.8b Melbourne Square Complex. The development will ultimately incorporate four residential towers, an office building, Hilton Hotel and retail podium.

Primewest Executive Chairman John Bond said the company was delighted to have secured the Melbourne Square asset, with the Woolworths store forecast to trade extremely well due to the intensive residential development in the area as well as the flow on effect from the surrounding entertainment, commercial and university campus amenities.

He said the masterplanned, mixed-use development of Melbourne Square would introduce thousands of new residents to Southbank in more than 2,600 new apartments, with the entire project due for completion by 2027.

“Stage One of the development features the strata titled, Woolworths-anchored shopping centre and two of the residential towers, providing an immediate catchment for the retail and child care facilities,” Bond said. “The ongoing development and other growth at Southbank will ensure strong population growth for several years, despite the current challenging environment.”

OSK Property Sales and Marketing Director, Scott Jessop, said he was thrilled with how well Melbourne Square has resonated with purchasers in the off-the-plan market, as well as the positive impact the project has already had on the community.

“It has been an incredibly exciting journey to see our vision for Melbourne Square come to life over the past four years. While last year had its challenges, it was immensely rewarding to see our parkland and Woolworths supermarket playing a supporting role for the public during a time of uncertainty. The amount of visitation they have both seen in a short timeframe is quite amazing,” said Jessop.

“Melbourne Square aims to deliver an elevated lifestyle experience for residents while championing the concept of a two-minute neighbourhood. Further to this, we have been thrilled to watch how seamlessly the project has anchored itself in the broader Southbank community.”

The two COX Architecture-designed towers feature contemporary interiors conceived by Carr and stand at 236.7m and 184.3m respectively.
COX Architecture Director, Paul Curry, said stage one of Melbourne Square formed a key component in the growing footprint of the City of Melbourne and will comprise a total of six towers when fully completed, including a workplace tower, luxury hotel and retail precinct.

“The Melbourne Square masterplan is an exciting public realm focused addition to the city’s urban fabric,” said Curry. “It is fantastic to see the project creating value for the broader precinct and it will continue to generate public and economic benefits throughout its development journey.”

The vast private and public amenity offered in the first stage of the Melbourne Square precinct spans more than 14,000m2 and key conveniences were activated with a considered range of pop-ups for residents during May.