As part of Belmont Forum’s commitment to supporting the community, the centre has announced Perth Homeless Support Group is the fourth recipient of its Giving Back Grant. The organisation is a local, not-for-profit charity supporting people who are living on the streets of Perth. Their mission is to see the need and make a difference without prejudice.

Jed McGregor, Perth Homeless Support Group’s Bayswater Depot Manager and Volunteer Coordinator, has been with the organisation for three years. As a grassroots charity receiving no government funding, McGregor and her team are very grateful to receive the Belmont Forum Giving Back Grant of $500.

McGregor said the money will assist with providing fresh and packaged food and toiletries to people at the East Perth Homeless Hub each Tuesday evening and Sunday, with additional support being provided via rescue hampers delivered directly to families in crisis.

Belmont Forum Centre Manager, Shane McLean, said: “We chose this organisation because it was one of the very few that treated those experiencing homelessness as individual people.”

McGregor agreed, saying: “The volunteers genuinely care about these people, we know when they are having a good day or when it’s a bad day for them. We take the time to sit and talk with them, as well as providing them with food and necessities.”

McGregor herself has also experienced homelessness; as a young girl of ten, it was safer for her to live on the streets than at home.

“After living for nine years on the street, I suffered severe anxiety and depression for many years and found it difficult to leave the house,” she explained. “In 2017, my husband, Aaron, who is now the President of Perth Homeless Support Group, convinced me to get out of the house and do something I loved and that would help others.

“As a new year’s resolution, we both decided to work with an organisation that supported the homeless,” she said.

McLean added that Belmont Forum is very proud to support Perth Homeless Support Group given that, at the moment, there are more people experiencing homelessness within the community.

“Our Giving Back Grant was developed to aid local, not-for-profit, grassroots organisations and we are pleased to officially recognise and support the wonderful work conducted by Jed, Aaron and their team of volunteers at Perth Homeless Group, and the difference they make to the vulnerable and those who are without homes,” McLean said.

Belmont Forum’s Giving Back Grant program will continue throughout 2021. 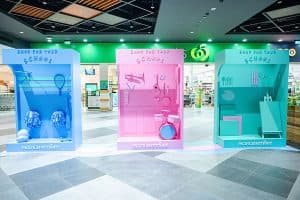